ESKISEHIR, Turkey, April 23, 2021 /PRNewswire/ — Amazfit, a global brand in the wearables market, today announced its exclusive smartwatch sponsorship of ESOK Rally in Turkey. ESOK Rally, which has been running since 2010 and been included in the FIA European Rally Cup for six years, is being held in Eskişehir on April 23-25 this year, with a total of 90 vehicles and 180 athletes registered. 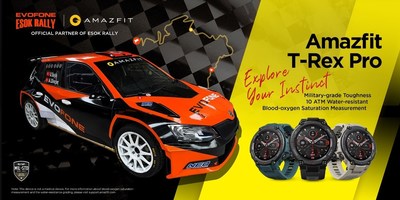 The ceremonial start of the ESOK Rally will be held in front of the Espark on Friday, April 23 at 21.00, and the 335,17 km race will last for two days and be run on the long asphalt-floor track. This sponsorship will allow Amazfit to title one track the «Amazfit Stage of Rally» (on Sunday April 25) and decorate rally cars with the Amazfit logo.

«The heartbeat of a rally driver can be over 170 during the race sometimes,» as noted by Bugra Can Kılıc, The FIA Youth Rally Champion of the FIA Turkey Rally Championship in 2019, «Rally drivers are actually endurance athletes; their heart rate can be increased because of the excitement before the race and also the stress during the race.»

Created to help Explore Your Instinct, which aligns with the rally drivers’ spirit of adventure, the Amazfit T-Rex Pro has passed 15 military-grade toughness tests and can withstand most kinds of extreme conditions and challenges. Its comprehensive health and fitness tracking functions include a host of popular outdoor sports modes for adventurous activities, and it can also record heart rate variability (HRV) to monitor stress levels, making it easier to stay fit and healthy.

Murat Sungur Özkan, Country Manager, Amazfit Turkey, said: «Steeped with perfect dirt roads and an electric crowd, we’re honored to have been able to celebrate the rally culture and bring the excitement to rally fans in Turkey. We feel glad the Amazfit T-Rex Pro sport watch will help with monitoring the physical and mental stress level of rally drivers, and supporting the local sport community’s wellness goals on and off the racecourse.»