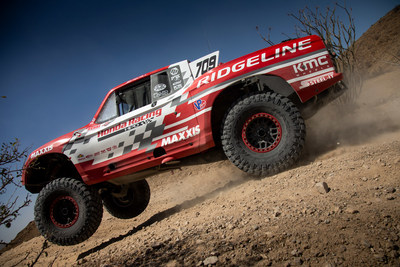 Driver Jeff Proctor and navigator Evan Weller built an early lead along the rough, 280-mile loop course that started and ended along the Gulf of California town of San Felipe.  Despite a pair of mid-race stops to replace cut tires, Proctor and Weller survived sand washes and multiple «square edge» ruts and jumps to build a 35-mile lead with 20 miles remaining, then cruised to the team’s first SCORE win of 2021, and sixth victory in Baja for the Ridgeline.

Quote
JEFF PROCTOR (owner/driver Ridgeline Off-Road Race Truck) won Class 7 for unlimited V6 Trucks: «My co-driver Evan (Weller) navigated a flawless race. We had some pretty good lines in the sand washes, and it was one of those days that everything just clicked.  We didn’t really have any issues.  We did have a couple earned flats, but for the most part it was a pretty good day for us. We are taking home the class win and couldn’t be more excited to kick this 2021 SCORE Season with a ‘W’. To get through all those nasty, sharp-edged rocks, all the square-edged whoops that San Felipe is known for, we are just stoked to be here at the finish line.»

Next
The Honda Off-Road Racing Team returns to action on the Baja peninsula June 12 for the 53rd annual SCORE Baja 500. Photos and information from the Ridgeline Off-Road Race Truck’s efforts can be viewed on Instagram at @hondaoffroadracing and @proctor_race.

Indiana Sportsbooks Show Resiliency with Return to Growth in May, According to PlayIndiana