ASHLAND, Ore., Oct. 11, 2021 /PRNewswire/ — Few of us are who we portray on Facebook, Instagram, or even LinkedIn. Social media is, in fact, carefully calibrated to undermine raw honesty. Instead, it spawns enticing illusions and addictive engagement. 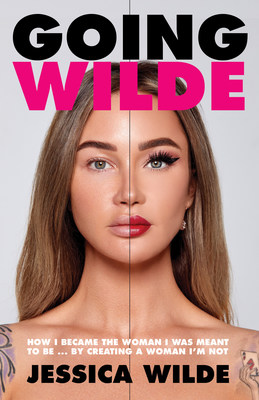 Instagram model Jessica Wilde has made a handsome living off that dark reality, but she’s also a victim of the digital funhouse mirror. Wilde’s namesake online persona is an idealized sex goddess who bears little resemblance to her creator. Unfortunately, it’s all too easy to confuse the two identities—even for the flesh-and-blood Wilde.

She explores that troubling paradox in her brutally honest and intriguing new memoir, Going Wilde: How I Became the Woman I Was Meant to Be by Creating a Woman I’m Not, published by Rogue Press.

It would be understandable to mistake Wilde’s story for a simple rags-to-riches tale. After all, she went from a youth marred by poverty, social isolation, sexual abuse, and bad decisions, to Internet fame that gave her control over her own destiny and provided a comfortable life for her and her daughter. Unfortunately, true happiness is never that simple.

As she accumulated followers and her online success grew, Wilde struggled mightily to define the real woman behind the avatar. The bitter irony was that becoming a social media celebrity made understanding and appreciating who she actually was, and forging deep and lasting relationships, incredibly harder.

This remarkably candid book follows Wilde’s thoughtful efforts to untangle social media’s jungle of destructive illusions and embrace her own authentic identity. Along the way, it serves as a cautionary tale for anyone creating a digital façade. Going Wilde reveals the harsh reality that social media undermines the essential personal connections it was created to foster. Wilde only found a healthy sense of self and deep, lasting happiness after realizing those things can’t be found in the next post or through a «like» button.