COPENHAGEN, Denmark, April 28, 2021 /PRNewswire/ — Global MedTech pioneer MagVenture has received CE approval for the treatment of addiction and Obsessive-Compulsive Disorder (OCD). In addition, MagVenture TMS Therapy® can reduce the symptoms of comorbid anxiety in patients suffering from depression. These new approvals will expand the treatment options of MagVenture TMS Therapy® considerably, which has been CE approved for Major Depressive Disorder (MDD) since 2011. 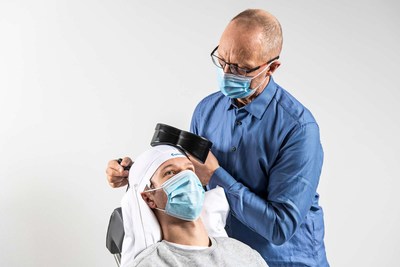 «These new CE approvals are based on the dedicated clinical TMS research studies conducted at multiple renowned research institutions,» states Senior Scientist Claus Mathiesen, PhD, MagVenture A/S, further adding: «We believe the CE approvals have the potential of becoming a true game changer for the clinical application of TMS therapy.»

TMS Therapy is an advanced, outpatient neuromodulation technology that uses magnetic pulses to stimulate the affected areas in the brain.

For addiction, a pilot study conducted by an Italian research team at Novella Fronda Foundation demonstrated a 69% effect for the TMS group and 19% for the control group receiving the standard of care treatment. These initial findings were followed up by an observational study.

«Our study involved 284 individuals with cocaine addiction. After receiving TMS therapy, they were followed for two years and eight months and our results clearly showed that TMS therapy led to long-lasting reductions in cocaine use,» explains Graziella Madeo, neurologist and coordinator of the research project and continues: «TMS can change the abnormal behavior by targeting the underlying brain-circuit dysfunction induced by substance use. Not only craving is reduced or absent, but our patients also experience changes in other aspects of their life, including a greater control in conditions potentially triggering a relapse in cocaine use.»

For OCD, a 45% response rate was reported for the group receiving treatment, compared to 18% in the sham group. For depression, the world’s largest randomized controlled study in TMS to date – comprising 414 patients – showed a response rate of 49% and a remission rate of 32% for those receiving theta burst magnetic stimulation. In addition, with this newly approved clinical benefit, TMS has also proven effective in treating the symptoms of anxiety in patients with depression with a response rate of 39% and remission rate of 23%, respectively.

«Expanding our therapeutic TMS indications is the core mission of MagVenture and we cannot wait to bring these new treatment options to the market with the potential to provide help for millions of people affected by these disorders,» concludes Claus Mathiesen.

About MagVenture
MagVenture is a Danish medical device company specializing in noninvasive magnetic stimulation systems for the treatment of mental disorders and addiction, as well as neuroscience research. MagVenture was the first TMS company to receive CE approval for TMS therapy for MDD in 2011 and this treatment is now offered at clinics around Europe and worldwide. MagVenture has subsidiaries in Germany, the UK, the USA, and Brazil, and is represented in more than 55 countries worldwide.

«As an adjunct for the treatment of adult patients suffering from Obsessive-Compulsive Disorder (OCD).»

«Treatment of Major Depressive Disorder (MDD) in adult patients who have failed to achieve satisfactory improvement from two prior antidepressant medications, at or above the minimal effective dose and duration in the current episode.»

MagVenture TMS Therapy® – clinical benefit
For subjects responding to the treatment of MDD, who have symptoms of comorbid anxiety, the clinical benefit can additionally include an improvement of anxiety symptoms.