WELLINGTON, Fla., May 6, 2021 /PRNewswire/ — The 2021 U.S. Open Polo Championship®, the third leg of the prestigious, world-class GAUNTLET OF POLO® series, has officially closed out polo season in Wellington, Florida. 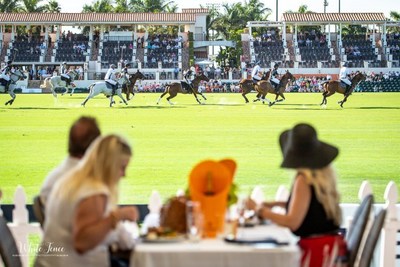 The thrilling action of the final game, sponsored by The Palm Beaches and U.S. Polo Assn., will be broadcast on the CBS Television Network on Sunday, May 9 at 2 PM, ET. CBS Sports Network will also televise an encore of the broadcast on Saturday, May 15 (8:00 PM, ET).

The U.S. Open Polo Championship is the perfect way to celebrate the tradition and heritage of the sport of polo at home. The polo-inspired «at home tailgate» includes chilled champagne alongside all your favorite tailgating snacks, all while watching Team Scone and Team Park Place face off in the finale to the GAUNTLET OF POLO series.

«After more than a year of uncertainty and the cancellation of our 2020 season before its mid-point, it was incredible to have the GAUNTLET OF POLO be contested back in The Palm Beaches, with top players, top equine athletes and a small number of fans celebrating the athleticism and competition of this amazing series,» said Stewart Armstrong, Chairman of the USPA.

Played on the U.S. Polo Assn. Stadium Field, the U.S. Open Polo Championship is one of the most historic tournaments in the United States, featuring the sport’s finest players, along with their equine partners, from around the world. One of the memorable aspects of this game is watching global polo star Adolfo Cambiaso play his ninth U.S. Open Polo Championship alongside his 15-year-old son, Poroto Cambiaso, as part of Team Scone.

«It’s thrilling to have the most prestigious of tournaments, the U.S. Open Polo Championship, broadcast on CBS and other networks worldwide. This coverage gives great exposure to the amazing sport of polo for millions of sports fans and consumers alike,» said J. Michael Prince, President and CEO of USPA Global Licensing, the worldwide licensor of the U.S. Polo Assn. brand. «U.S. Polo Assn. proudly supports and celebrates these players on the global stage and the brand’s authentic connection to the sport of polo.»

As the official brand of the United States Polo Association (USPA), U.S. Polo Assn. was the premier sponsor of the entire GAUNTLET OF POLO series. All three tournaments of the series, the C.V. Whitney Cup®, the USPA Gold Cup® and the U.S. Open were played at the International Polo Club Palm Beach (IPC) in Wellington, Fla. and live-streamed on Global Polo TV, a pay-to-view broadcasting service.

U.S. Polo Assn. is the official brand of the United States Polo Association (USPA), the nonprofit governing body for the sport of polo in the United States, and one of the oldest sports governing bodies, having been founded in 1890. With a multi-billion-dollar global footprint and worldwide distribution through some 1,100 U.S. Polo Assn. retail stores, department stores, sporting goods channels, independent retailers and e-commerce, U.S. Polo Assn. offers apparel for men, women and children, as well as accessories, footwear, travel and home goods in 180 countries worldwide. Recently ranked the 5th largest sports licensor in License Global magazine’s 2020 list of «Top 150 Global Licensors,» U.S. Polo Assn. is named alongside such iconic sports brands as the National Football League, National Basketball Association and Major League Baseball. Visit uspoloassnglobal.com.

USPA Global Licensing Inc. (USPAGL) is the for-profit subsidiary of the USPA and its exclusive worldwide licensor. USPAGL manages the global, multi-billion-dollar U.S. Polo Assn. brand and is the steward of the USPA’s intellectual properties, providing the sport with a long-term source of revenue. Through its subsidiary, Global Polo Entertainment (GPE), USPAGL also manages Global Polo TV and produces global broadcasts and live streaming that bring greater awareness to the sport of polo. Visit globalpolo.com.

cbs-sports-to-broadcast.jpg
CBS Sports to Broadcast Prestigious 2021 U.S. Open Polo Championship® on May 9 Presented by The Palm