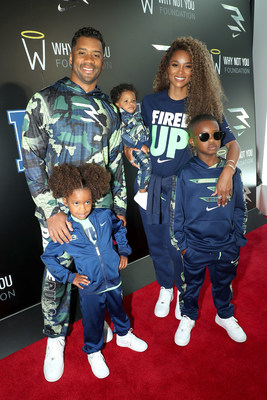 On June 24, Russell Wilson gave a sneak peek of his signature clothing line, 3BRAND, at the opening of the new Rookie USA flagship store

The children’s clothing line, 3BRAND, named after Russell Wilson’s close connection to the number three and his Seahawks number, is a mix of sport meets fashion, music and lifestyle. This 40-piece collection was created for boys and girls, ages 12 months to 20. The brand’s full line will be available in August.

3BRAND is donating 3% of sales to the Why Not You Foundation. Founded in 2014, Russell Wilson and Ciara’s Why Not You Foundation is a nonprofit dedicated to fighting poverty through education, empowering youth to lead with a why not you attitude. The foundation also supports student access to equal education opportunities, children’s health and food security initiatives. Its mission is to equip today’s youth with the skills and opportunities to become tomorrow’s leaders. In Fall 2021, the foundation will open its first Why Not You Academy, a school that blends real-world applications with classroom learning.