NORTHFIELD, Minn., May 21, 2021 /PRNewswire/ — NASCAR Hall of Famers Tony Stewart and Ray Evernham have partnered with Monster Games to launch a brand new racing video game called SRX: The Game on May 28, 2021. The game will feature the all new Superstar Racing Experience series, which debuts this summer on CBS, and is a collaboration between Tony and Ray, as well as George Pyne and The Montag Group. 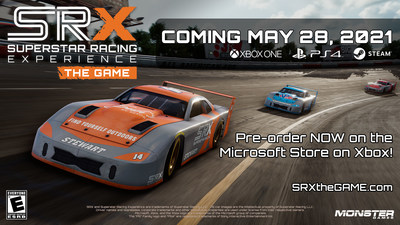 SRX: The Game will feature all the thrills and excitement of the real SRX race series, including 16 superstars of motorsports such as Tony Stewart, Helio Castroneves, Bill Elliott, Tony Kanaan, Michael Waltrip, and many others. It’s racing the way it was meant to be, featuring a mix of dirt and asphalt short tracks like Eldora Speedway, Knoxville Raceway, Nashville Fairgrounds Speedway, and several others. In addition to the SRX series, race in Stadium Trucks, 305 Wingless Sprints, and Dirt Late Models on over 50 tracks for non-stop action.

«After our successful partnership with All-American Racing and the Sprint Car game, I was excited to sit down with Monster Games and get to work on this new project» said Tony Stewart, «Between the unique style of racing that SRX is bringing to the table, the mix of dirt and asphalt, and the fact that it’s all old school short tracks, we knew a video game would be a ton of fun for our fans.»

The game will feature a career mode where the goal is to start out as a local dirt track racer and work your way up through the ranks. But, to get to the SRX series, you’ll have to make a name for yourself, and ultimately become a Superstar.  Several different modes of play, including Online Multiplayer, Quick Race, and Championship Mode, add to the fun.

«SRX is all about driver talent, and seeing who is the best. It’s that simple. We want to put these guys on some amazing tracks in equal cars, wave the green flag, and then enjoy the show» said Ray Evernham, «I can’t think of a better experience to put into video game form than what we’re trying to do with the real world series. I’m really excited about what we’re building, and can’t wait to show it off to the world.»

SRX: The Game will be available for digital download on the PlayStation® 4, Xbox One, and Steam for $39.99 on May 28, 2021. It will be available on the Xbox One for Pre-order starting May 21st. The SRX season begins on June 12th at Stafford Speedway and will be broadcast on CBS on Saturday nights this summer. For more information on SRX: The Game please visit www.SRXtheGame.com and follow us on Twitter and Facebook (@SRXtheGame).

About Monster Games
Monster Games is a video game developer and publisher in Northfield, Minnesota that has over 20 years of experience in bringing racing and action games to market. They are most recently known for their work on Tony Stewart’s All-American Racing, and have developed a total of 18 games across 12 different platforms.