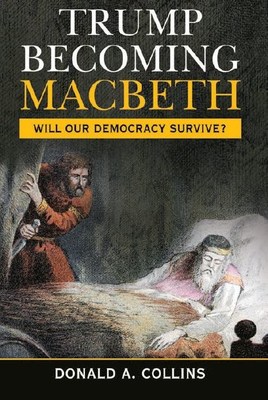 «How do you govern when you [Biden] lost», said Donald Trump on various radio shows.

Will our democracy survive if Trump gets another shot at the presidency?  Will we be safe as citizens if he wins?  Author Donald A. Collins considers this the moment of truth for America and our democracy in his new book «Trump Becoming Macbeth.»

This book is a compilation of the best articles out of many published on the Church and State website written about Donald Trump from late August 2020 the first time when author Collins recommended that readers vote for Joe Biden for President of the United States.  Collins has a no holds barred perspective of close to four generations of progress in America.  He has travelled the world extensively and seen the best and worst of humanity in many forms.  He understands that the most likely scenario for failure of the American democratic system is for a dictator to emerge and seize power away from the people.  He recommends, like many before him, that the United States should set an example by giving its people and all the people in the world free contraceptives to empower women and reduce our human population painlessly from its nearly 8 billion today to 2 billion by 2100.