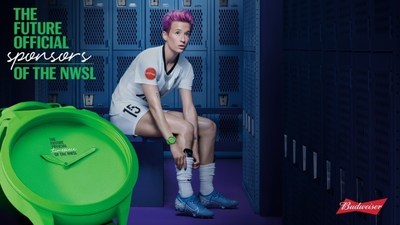 The agency was awarded a Gold and Bronze in the Social & Influencer Lions category, another Gold in Entertainment Lions for Sport, and a Bronze in Direct Lions for Budweiser’s «Future Official Sponsor,» a campaign that not only addressed the pay gap in female sports but found a way to successfully fill it.

The campaign centers on the idea that, while many attribute the pay discrepancy in sports to gender discrimination, it is also driven by a massive gap in sponsorship. So, together, Budweiser and VaynerMedia New York created an online marketplace dedicated to finding sponsors for the National Women’s Soccer League (NWSL). The platform allowed fans to browse «Future Official» sponsors’ products, pledge to purchase them before they even existed, and share them on social media while tagging the brands they wanted to see fill the vacancy.

Nine placeholder products for some of the biggest sponsorship categories in sports were created, and Budweiser recruited global soccer icon Megan Rapinoe to promote these products as if they were real. As a result, in 2020, the NWSL added six new sponsors and the NWSL announced an increase in their salary cap by almost 20%.

See the official website here, and the campaign case study in full here.

«VaynerMedia aims to create the most talked about, culturally relevant campaigns that deliver business results for our clients and are consumed by actual consumers. We are thrilled to have our partners at Budweiser celebrated at this year’s Cannes Lions Festival of Creativity, and honored to have collaborated with them to make real change,» says VaynerMedia CEO, Gary Vaynerchuk.

«Winning our first Gold Lion is such an honor, and winning for an idea that saw real change in the world makes it even more special for us. Brands and sponsors can be more than just a logo on a jersey or a billboard in the stadium; they can solve problems that leagues and athletes actually care about. We are so proud to have worked with our partners at Budweiser to bring this idea to life,» says VaynerMedia Global Chief Creative Officer, Rob Lenois.

VaynerMedia also received another 8 shortlists at this year’s Festival, including Glass Lion for Change. This is the first time VaynerMedia has taken home a Gold at the Cannes Lions Festival of Creativity, having only been awarded Silver and Bronze in the past.

Tendinopathy Market is Growing at a 0.6% CAGR Driven By the Potential Pipeline Drugs During the Study Period [2018-2030], States DelveInsight